Watch and listen as Angela and Janice describe their own lived experiences facing racism in the healthcare system, and the impact of this racism on themselves and their families. Angela and Janice are active in addressing racism in healthcare, and share important insights on the systemic presence of racism, and the education and actions that need to be taken to overcome these significant challenges. 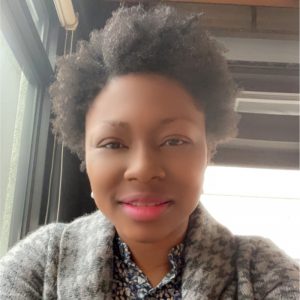 Adigo Angela Achoba-Omajali (she/her/hers), hails from autonomous Ichala Ajode indigenous community of the Ibaji tribe in Kogi state of central Nigeria, and this situates Angela as a Black, Nigerian-Canadian Nurse. Angela earned both her BScN and MN degrees from the Thompson Rivers University which is located on the traditional lands of the Tk’emlúps te Secwépemc within Secwépemc’ulucw, the traditional and unceded territory of the Secwépemc, where she lives with her husband and two children.

Angela has been working as a Registered Nurse for over 10 years largely in Mental Health and Substance Use as part of the Assertive Community Treatment (ACT) team with Interior Health Authority. She is currently in a temporary seconded position as Steward-at-Large with the British Columbia Nurses Union (BCNU). Additionally, Angela is one of the co-founders of the Coalition of African, Caribbean and Black Nurses in B.C.
The CACBN is a grassroots nursing-led organization founded in 2020 after Angela and other members recognised the increasing need to move away from colourblind policy making. They advocate for equity within healthcare systems by raising awareness on the challenges, barriers and health needs of African, Caribbean and Black people living in B.C. Read about their open letter here.

Angela’s interests include addressing Anti-Black and Anti-Indigenous racism in the healthcare system and she is currently involved in a number of Anti-Racism initiatives. Besides nursing at the clinical or academia level, Angela likes to travel, network and spend time with family, as well as communities in pursuit of social equity, peace and inclusive human development. 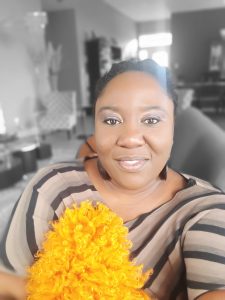 Janice John-Mitchell is privileged to be on the unceded Indigenous land of the Coast Salish peoples: there she lives work and play.

Janice has been a registered nurse for over 12 years in Canada, and outside of Canada for over 18 years. She migrated from the Caribbean as a registered nurse. Janice has a passion for justice and believes all humans are equal. She acknowledges that equality is not equity and advocates for marginalized groups, such as the African and African Descent demographic with which she herself identifies.

Janice was born in Trinidad and Tobago, a country in the southernmost part of the Caribbean. Although very close to Venezuela in South America, Trinidad and Tobago is part of North America. Janice comes from a diverse cultural background and is happy to have been part of a nation that shares and respects diversity. Janice wishes to see this same respect for diversity more prominent in Canada, her home.

Janice John-Mitchell has always advocated for people in the African and African descent community and feel strongly that acknowledgement of a person’s situation is a start to bridging gaps in supporting minority and marginalized groups.

Reducing Documentation Burden with Satinder Kaur This episode focuses on how one organization is attempting to reduce documentation burden to prevent nurses’ burnout by identifying redundant or double documentation required to be completed by nurses. The goal is to reduce nurse’s workload related to documentation and information

Improving Accessibility and Healthcare for Indigenous People with Bev Smith

Michael Villeneuve Reflects on a 44-Year Nursing Career In our Season Two finale of Nurses' Voices, join hosts Gail Donner and Mary Wheeler for an honest and personal conversation with Michael J. Villeneuve, RN, MSc, FAAN, who retired in May 2022 as the Chief Executive Officer of the